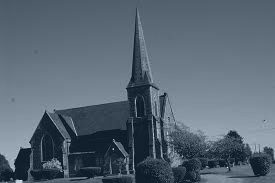 St Maeldoids Church
Monaghan Ireland
This groundbreaking project is rooted in the story of the Monaghan Asylum Soviet of 1919, when the striking asylum workers barricaded themselves into the hospital, raising a red flag and declaring their independence. This was the first soviet commune to be mounted outside of the newly-established USSR.


In 'Elsewhere' Celine, a hospital patient decades later, remains locked within the moment of the soviet. In her visions, Celine displaces herself into the role of the revolutionary Peadar O'Donnell, leader of the 1919 Soviet, invoking a world where history, ideology and fantasy collide.

Featuring a cast of seven singers and nine instrumentalists, Elsewhere presents a rich and diverse musical universe which jolts, glitches and fades from the exhilarating power of the hammered barricades to the deeply introspective universe of a vulnerable woman, forgotten in her incarceration. The libretto, co-written by Gallen with poet Annemarie Ní Churreain and playwright Dylan Coburn Gray, breaks the boundaries of traditional operatic form, allowing Celine's story emerge in a myriad of subtle and unexpected ways.

As a part of the opera's research and development, the cast and creative team will spend two weeks in residence at Íontas Theatre, Castleblayney, in November '19, led by director Tom Creed and musical directors Fiona Monbet and Romain Louveau. This residency period will culminate in a 'first look' concert performance in St Maeldoid's Church in Castleblayney on Friday November 29 offering local audiences a chance to encounter this new work at its outset - two years before its stage premiere at the Abbey Theatre.

Elsewhere is the first production of Gallen's own music-theatre company -Straymaker, and is being made in collaboration with French ensemble Miroirs Étendus in association with the Abbey Theatre and Irish National Opera funded by The Arts Council and Creative Monaghan and Institut Francais and with generous support from Iontas Arts Centre, Centre Culturel Irlandais, Paris and Monaghan Arts Office.